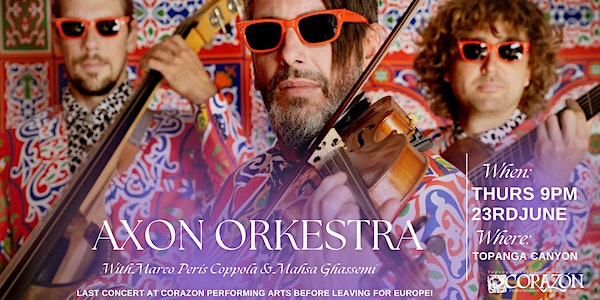 Between busking in a mule-drawn, handmade wagon across Europe performing Eastern European gypsy music to mixing world, jazz, and gypsy music in artistic haunts of Los Angeles, it’s no surprise that Fabrice Martinez has spent his life absorbing the culture and music of every country he’s traveled through. This is why the Paris-born, L.A.-based artist is considered one of the most versatile and musically diverse violinists today.

Marco Peris Coppola is an Italian band leader, booking agent, creative strategist, and percussionist focused on the Tupan/Davul, an old world drum found in countries as diverse as India, Bulgaria, Egypt and Brazil. His musical trajectory is centered in Balkan sounds and rhythms, though his history includes years as co-leader of a Samba troupe, and a decade of playing Brass music across Italy, Argentina and the US. Marco is the mastermind behind the beloved Bay Area powerhouse Inspector Gadje, and he is one of the forces behind the Kafana Balkan series, described by the SF Weekly as “The best crazed Balkan Brass Band dance party.”

DUSTY BROUGH, GUITAR Guitarist Dusty Brough brilliantly combines his roots in Flamenco with Jazz, Folk, Brazilian, Gypsy and Balkan music. As a composer, he integrates these eclectic influences with his unique approach to music and a “blatant disregard for genre boxes” (Joe Bendel, Epoch Times). Brough’s nylon-string guitar playing is marked by an unparalleled agile technique that supports a buoyant aesthetic. Dusty creates something truly remarkable by seamlessly blending lush harmonies, intricate rhythms and improvisation, with a fluidity, presence, and rhythm that can only be compared to the rolling waves of the ocean. www.dustybrough.com

Miles Jay is a composer and instrument maker, and an active performer with many prominent artists around the world. Broad in range of his musical influences and communities, Miles has lived abroad for years absorbing styles from many traditions, and has performed in such venues as Carnegie Hall, the Emirates Palace Abu Dhabi, TED 2013 Long Beach, and the United Nations.

From 2005 to 2012, Miles lived in Egypt and Lebanon, performing and collaborating with many beloved artists of the region, including Youssou N’Dour, Ziad Rahbani, Naseer Shamma, Ross Daly, and the Cairo Symphony Orchestra. During this time he co-founded and co-produced several ensembles and albums, as well as traveled extensively around the region for concerts in Dubai, Turkey, Greece, Tunisia, Oman, Algeria, Senegal, Syria, and Western Europe. Active in studios as well, Miles worked with composer Khaled Mouzannar as music consultant and instrumentalist on the score to Nadine Labaki’s latest film “Where do we go Now,” an official selection of both Sundance and Cannes. Throughout all of this valuable experience, Miles focused on re-imagining the bass’s role both as an accompanying instrumental and as a melodic lead, adapting a wide range of Arabic, Greek, and Turkish ornamentation to develop his own extended technique when playing with a bow.

Mahsa started playing cello at the age of 12 and pursued a music degree, obtaining a diploma from the only official music school in Tehran, at the age of 18. During the same time she was performing with Bahman Symphony orchestra, The Iranian-Austrian Chamber Orchestra and also won the “Youngest Instrumentalist” competition in Iran at the age of 16. She also played with Tehran Symphony and the national Television & Radio orchestra. She has also recorded in several of Tehran well known studios for many movies and TV series all before the age of 18.

She decided to further enhance her musical technique and knowledge and got acceptance to the Komitas State Conservatory Masters program in Armenia and trained with internationally recognized cellist Maestro Zareh Sarkisian.

While studying she played in various symphonies and chamber ensembles including The Yerevan Philharmonic orchestra as her reward from the University for graduating with honours. She was one of a chosen few to play for world renowned cellist, Maestro Mstislav Rostropovich. she also played with Demis Roussos’s band while in Yerevan, Armenia.

After Completing her Master’s Degree in Yerevan, She moved back to Iran and became the Youngest teacher at The University of Art, faculty of music in Tehran at the age of 22. She was also a soloist with Tehran Symphony, Armenian Virtuosi string orchestra conducted by Loris Tcheknavorian and made many recordings before moving to Canada with well known iranian composers. While In Canada, she received her 2nd Masters degree in Cello Performance, Played with Toronto Philharmonia, Sudbury Symphony, Toronto sinfonietta and has been the Principal Cellist for the Koffler Chamber orchestra and the Helliconian Orchestra. She has also Played non-classical groups such as playing for an audience of 15000 with the Trans-Siberian Orchestra at the Air Canada Centre. She has worked with many well known contemporary Iranian composers and performers such as Loris Tcheknavorian, Ahmad Pejman, Karen Homayunfar, Saeed Shanbezadeh, Habib Meftah Booshehri, Khachik Babayan, Iman Vaziri, and Babak Amini.