END_OF_DOCUMENT_TOKEN_TO_BE_REPLACED

DIALOGUES ON THE ART OF ARAB FASHION - THE QUR'AN & THE HIJAB

Samina Ali is an award-winning author, curator, and popular speaker. Her debut novel, Madras on Rainy Days (Farrar, Straus, Giroux), was the winner of France’s prestigious Prix Premier Roman Etranger Award and a finalist for the PEN/Hemingway Award in Fiction. Poets & Writers Magazine named it a Top Debut of the Year.

In the critically acclaimed global exhibition, Muslima: Muslim Women’s Art & Voices, Samina presents a groundbreaking collection of thought pieces and artwork from contemporary Muslim women who are defining their own identities and, in the process, shattering pervasive stereotypes.

Samina has spoken extensively at a wide range of universities, from Harvard and Yale Universities to community colleges, as well as at other institutions worldwide, including as a cultural ambassador for the U.S. State Department and a featured presenter at the Nobel Women’s Initiative 2017 International Conference. The recipient of fiction awards from the Rona Jaffe Foundation and the Barbara Deming Memorial Fund, she has been featured in The Economist, The Guardian, Vogue, National Public Radio (NPR) and elsewhere.

Continuing in the spirit of her widely popular Tedx talk, “What Does the Qur’an Really Say about a Muslim Woman’s Hijab?”, Samina is currently writing a nonfiction book that weaves her personal story with a passionate appeal for women’s equality and justice.

Dr Reem Tariq El Mutwalli, is a published author, lead curator and public speaker. With over 30 years of experience, she is an expert consultant in Islamic art and architecture, interior design, historic dress and UAE heritage.

She is also the founder of the Zay Initiative. A non-profit UK registered initiative advancing the preservation of cultural heritage, through the collection, documentation and digital archiving of Arab historical attire and their stories. Our goal is to empower and sustain global cross cultural dialogue to inspire creative minds. 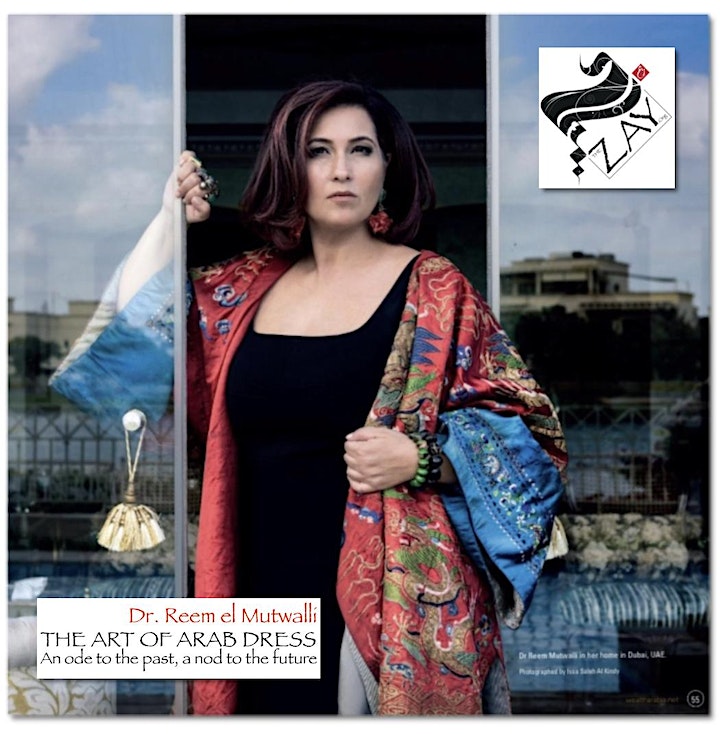