Join NMCSU for an exciting and intriguing discussion!

NMCSU’s new virtual lecture series titled Highlighting Hidden Stories: Examining the Relationship Between the African Continent and the Middle East looks to challenge the artificial boundary between these two regions, and explore the lives, experiences and role played by marginalized voices in Middle East history. This lecture series consists of a series of lectures/panel discussions taking place over the course of the year, each on a new theme and engaging with a different region of Africa.

Dr. Ghenwa Hayek is Associate Professor of Modern Arabic Literature at the University of Chicago. Her research focuses on the entangled relationships between literary and cultural production, space and place, and identity formation in the modern Arab Middle East, with a specific focus on Lebanon. She is particularly interested in using the formal techniques of literary scholarship to nuance and complicate our understandings of the processes through which these dynamic cultures understand, represent, and position themselves in the world. She is the author of Beirut, Imagining the City: Space and Place in Lebanese Literature and is currently researching the affective impact of a century of ongoing emigration on Lebanese culture (c.1860-present), and the imaginaries and grammars that have been mobilized to express it across a wide range of cultural forms, from prose, to poetry, to cinema. Her research explores diaspora as a complex constellation of experiences that gain and in turn produce specific cultural and social resonances. Because of the manner in which race, gender, and class anxieties intersect in its articulation, she pays specific attention to how Lebanon and its African diaspora have been yoked together in the Lebanese national imaginary since the late nineteenth century. She argues that a close reading of these different texts that engage the African diaspora exposes a racial dialectic that has been used to highlight and sustain anxieties about the nation and national identity. 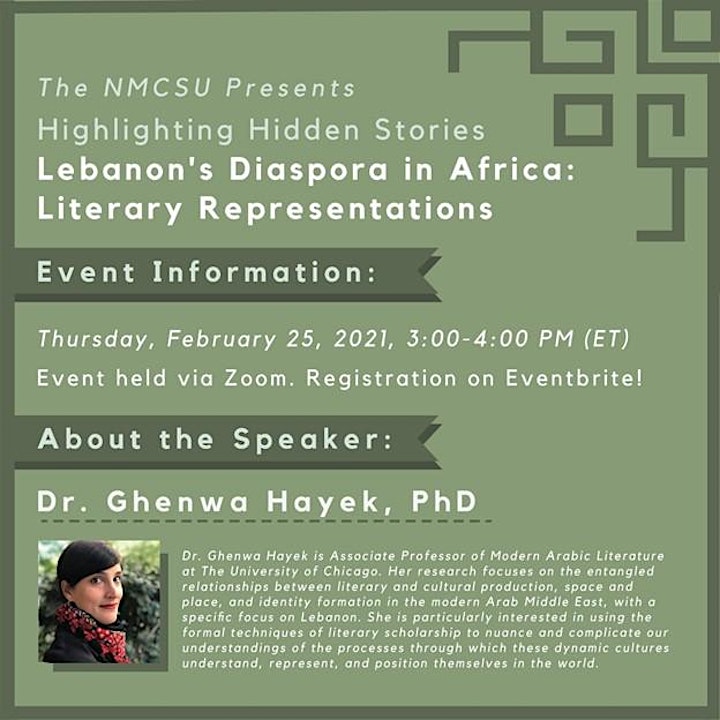