Instruments The Arabic instrument known as the “oud” came from the Arabic word al-oud which became the “lute”--the forerunner to the Western guitar.

Organization:
by The Block Museum of Art

“Present Futures: Sci-Fi and Social Ecology” is a program of short films guest curated by Roisin Tapponi of the Habibi Collective.

The second night of the Habibi Collective’s guest-curated shorts is available here.

Join the Block Museum online for the screening series:

Starting at 7 PM Central Time on October 29th, “Present Futures” will be available to watch on Block’s Vimeo page for a 24-hour period.

Please note: The screening of “Inherited Memory” on Friday, 10/30 will be followed by a discussion (format tbd) between Roisin Tapponi, founder and curator of the Habibi Collective in the U.K., and “Liberating History” series curators Simran Bhalla and Malia Haines-Stewart.

“Present Futures” is the first of two shorts programs guest-curated by the Habibi Collective, a digital archive and curatorial platform based in London, focused on femxle filmmaking from the Middle East and North Africa. This screening features short films by women that imagine futures and forms of resilience in a time of climate violence. The films include Palestianian artist Larissa Sansour’s In Vitro, a post-apocalyptic sci-fi short about loss and revival. Each film explores how the climate crisis intersects with ongoing questions of inheritance and resistance in the Arab world.

The films in Present Futures: Sci-Fi and Social Ecology appear with permission from the artists

Liberating History: Arab Feminisms and Mediated Pasts celebrates Arab women filmmakers. The films draw on archival material, Islamic visual culture, and ethnographic practice to bring a decolonial and feminist perspective to personal and national pasts. The series includes path-breaking films such as Heiny Srour’s Leila and the Wolves, which centers Arab women’s struggles in the region’s modern history, and Selma Baccar’s Fatma 75, an essay film combining history and fantasy, as well as other rare and recent selections from the Middle East and North Africa. The series will also feature two nights of short films curated by the Habibi Collective. 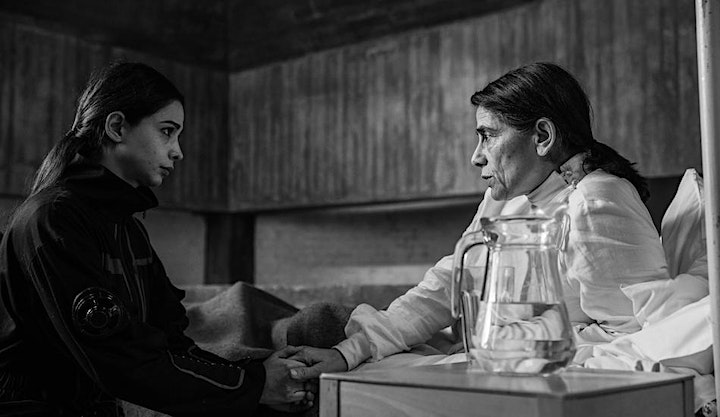 Róisín Tapponi is a curator, writer, editor, and researcher currently based in London—

In 2018 she founded Habibi Collective, a digital archive and curatorial platform for MENA women’s filmmaking. She is currently developing the first independent streaming service for MENA cinema, SHASHA Movies Ltd.

Tapponi has directed four regional film festivals, including Independent Iraqi Film Festival (IIFF). She has curated programmes on MENA filmmaking in galleries, academic institutions, festivals and cinemas across the world. Tapponi currently works at The Mosaic Rooms, a gallery in Kensington dedicated to contemporary Arab art.