Damascus Damascus is the oldest continuously inhabited city in the world, with records dating it back to 1500 BC, and carbon dating going back to 6300...

END_OF_DOCUMENT_TOKEN_TO_BE_REPLACED 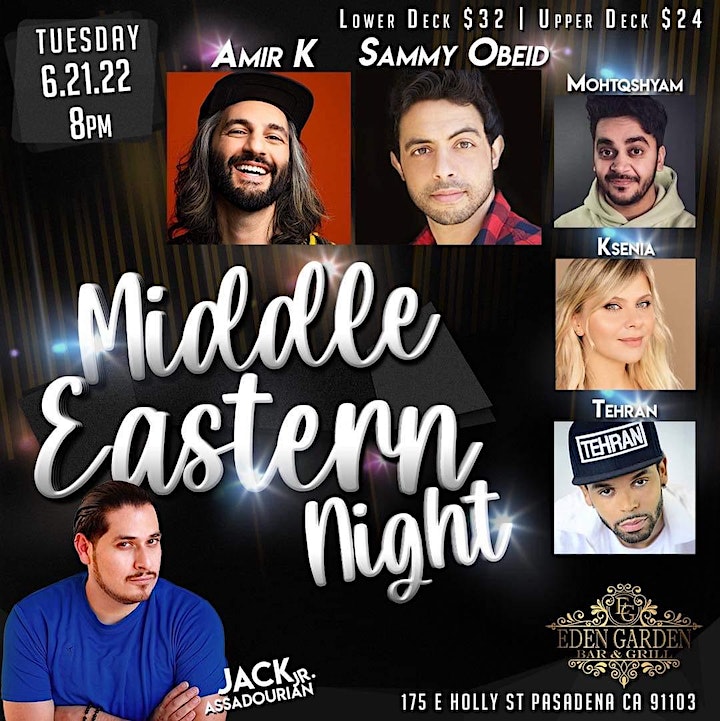 Amir K has been entertaining audiences for 10 years, performing live across the U.S. and on Television.

His fun, unique approach to storytelling brings audiences together through his improvisational talent,

characters and charisma. Born in Iran and raised in Southern California, Amir offers a unique point of

view shaped by his multi-cultural upbringing.

with Cameras . Amir is best known for his stand-up comedy, but is also an accomplished actor. He won a

Sammy K. Obeid (1984) is an American writer and stand-up comedian. He has released one comedy album, Get Funny or Die Tryin. The New York Times described his comedy as displaying “an analytic style full of wordplay, clever misdirection and ethnic humor riffing on his Middle Eastern roots”.[1] Obeid is Palestinian-American.[1]

Obeid has been featured on America’s Got Talent, Conan and Last Comic Standing. He once performed 1,001 nights of comedy in a row, which he claimed as a world record, although it was not recognized by Guinness.[2] Obeid is also a host for the Netflix show 100 Humans and the founder of KO Comedy.[3]

As the son of comedy club owners, Jack essentially grew up in the comedy scene, and over the years made the transition from spectator to on-stage performer. Over the last few years he has delved into the acting and writing world and has moved his way up the ladder to find himself traveling across the country featuring for the likes of Marlon Wayans, Brandon T. Jackson, Damon Wayans Jr and David Spade. His most recent and iconic endeavor has been the creation of the NoHo Comedy Festival, a festival that attracted some of the country’s most talented comedians. You’ve seen him on Amazons Laugh After Dark and Was recently on the Arsenio Hall show for Netflix.

Today, he can be found headlining in clubs across the country, guest starring in movies like “50 Shades of Black”, as well as participating in popular podcasts like “The Church of What’s Happening Now with Joey Diaz

CAIR Presents: Get Out the Jokes Comedy Tour (Charleston, SC)

CAIR Presents: Get Out the Jokes Comedy Tour (Raleigh, NC)

CAIR Presents: Get Out the Jokes Comedy Tour (Nashville, TN)