Join Reem Kassis, author of The Arabesque Table: Contemporary Recipes from the Arab World, for a conversation with radio and podcast editor/producer Dalia Mortada. 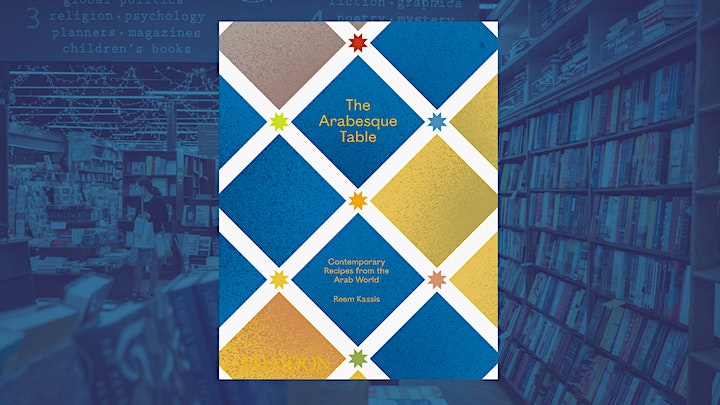 A one-of-a-kind collection of original contemporary recipes from across the Arab world from acclaimed author Reem Kassis.

The Arabesque Table takes inspiration from the traditional food of the Arab world, weaving Reem Kassis’s cultural knowledge with her contemporary interpretations of an ancient, remarkably diverse cuisine. She opens up the world of Arabic cooking today, presenting a mosaic of 130 delicious, accessible home recipes — from simple salads to flavorful mains and fragrant desserts. Organized by primary ingredient, her narratives formed by her experiences and influences bring the dishes to life, as does the book’s vivid photography.

Reem Kassis is a Palestinian writer whose work focuses on the intersection of food with culture, history and politics. Her writings have appeared in The Wall Street Journal, The Washington Post, the LA Times and various academic journals. She is the author of Phaidon’s acclaimed cookbook The Palestinian Table, which won the Guild of Food Writers First Book award and a Gourmand World Cookbook award; it was also a James Beard Best International Cookbook finalist and one of NPR’s Best Books of the year. Her second book, The Arabesque Tableis a collection of contemporary recipes tracing the rich history of Arab cuisine. She grew up in Jerusalem, then lived in the US, France, Germany, Jordan, and the UK. She now lives in Philadelphia with her husband and two daughters.

Moderator Dalia Mortada is a Syrian-American journalist and food enthusiast who extensively reported on Syrian refugees throughout the Middle East, Europe and the U.S. through the lens of food. Her work and recipes have appeared in The New York Times, The Nationmagazine, PRI’s The World, Culinary Backstreets and NPR, where she currently works as an editor.

Brookline Booksmith, est. 1961, is a family owned bookstore located in the heart of Brookline, Massachusetts. Through our thoughtful curation, eager and voracious booksellers, and award-winning events series, we strive to be a haven for those who find comfort, enrichment, and joy in books.

Our general event series is all about one thing: bringing people and the stories they value closer together. The series covers an eclectic blend of genres and topics for all ages, serving as a platform for seasoned authors, promising debuts, local launches, large scale national events, and all the places where they intersect. Find more at brooklinebooksmith.com!

The Middle Eastern Market: A Food Oasis and Staycation Getaway