Olive Trees Olive trees in the eastern Mediterranean are believed to be over two thousand years old and can grow to be forty feet tall and produce...

END_OF_DOCUMENT_TOKEN_TO_BE_REPLACED

After their Son was Doxed, Death Threats Forced a Syrian Family to Shutter their Restaurant. Police are Investigating

The threats to the restaurant and its owners started pouring in almost immediately.

“Light the shop on fire,” one person commented on the Facebook page for Soufi’s, a beloved Syrian eatery in Toronto.

An encrypted email to the restaurant’s owners, a Syrian family who immigrated in 2015, spoke of “defending our Homeland to terrorist threats of your kind.”

Their trendy downtown restaurant, which served up flatbreads and desserts, had been celebrated as a symbol of Canada’s tolerant, inclusive culture. It was an attitude that had welcomed tens of thousands of Syrian refugees, embracing them — and their cuisine — as they fled their war-torn home.

But this week, the family behind the restaurant said they were closing over the death threats. Toronto police have opened an investigation, a spokesperson told The Washington Post.

The acclaimed eatery’s abrupt closure points to the cracks emerging in that multicultural, harmonious image of Canada, as the country’s political divisions play out out through hateful rhetoric, heated protests and anonymous trolling on the Internet.

The Alsoufis, originally from Damascus, had left Syria behind over two decades ago for Saudi Arabia, where they ran a beachside resort in Jiddah. The patriarch, Husam, worked as a civil engineer, while his wife, Shahnaz, worked in special education.

In 2012, their daughter, Jala, moved to Canada to study architecture and psychology at the University of Toronto. Her parents and two brothers followed her three years later.

“We were looking for a new home to hold us, and we couldn’t find [anywhere] better than Canada to come,” Husam said in a magazine interview in June. “We are starting our new life.”

The family was unsatisfied with Toronto’s diluted versions of Middle Eastern food — halfhearted falafel and shawarma — and their parents were unable to put their Arabic degrees to use in their new city. So they decided to open a restaurant instead.

Shahnaz ran the kitchen and Husam managed finances; Jala worked on marketing while their eldest son, Alaa, took care of the front-of-house. Ayham, a younger brother still in high school, served as the taste tester.

In 2017, the family opened Soufi’s in a white-walled storefront on Queen West, a fashionable strip in what Vogue called one of the coolest neighborhoods in the world. The restaurant was just as hip as it was Syrian, with brick walls and chalkboards covered in artifacts, photographs and writing in Arabic.

The Alsoufis said they hoped the restaurant would serve as a hub for Toronto’s emergent Syrian community — while also introducing their new city, whose motto declares that “diversity is our strength,” to the culture and cuisine of their home.

“It’s not only wars and problems that are happening there,” Husam said. “We have a lot of love to give, and Syria is a very rich culture and rich cuisine. We want people to taste some of it.”

In particular, the restaurant placed an emphasis on hiring refugees, thousands of whom had been resettled in the Toronto area. Their familiarity with the cuisine proved key in the kitchen, which focused on two types of Syrian street food: manaeesh, a circular flatbread topped with crumbled halloumi, zaatar, or other vegetables and meat; and knafeh, a baked dessert of shredded phyllo dough and cheese doused in orange blossom syrup.

“Syrians are people. We’re not just what they see in the news,” Jala said in a video interview with Uber Eats. “We’re more than that, and despite everything that’s happening there, we are still a vibrant culture.”

The restaurant was a success, heralded in a New York Times feature as the face of Toronto’s growing passion for Syrian food. “The Alsoufi family has purposefully struck a balance between traditional Syrian flavors and contemporary Canadian tastes,” the article said. “The meat is halal, but beer is served, and a sticker supporting gay, lesbian and transgender causes is displayed on the front door.”

All the while, as Soufi’s rose to fame, Alaa became involved in local anti-fascist protests. Before this fall, he had already demonstrated in support of LGBTQ rights and against racism targeting migrants, the Toronto Star reported.

Then, on Sept. 29, he attended a rally outside a fundraiser for Maxime Bernier, a far-right member of the Canadian Parliament from Quebec who was discussing free speech in Canada with the American political commentator Dave Rubin.

Bernier had broken off last year from the Conservative Party to head up a new group that has since been linked to white supremacists. Amid a long-shot campaign to gain influence in Parliament, he has vowed to cut immigration by more than half, railed against the “globalist agenda” and declared an end to the era of “political correctness.”

That’s what brought protesters outside his fundraiser, at a college about an hour outside of Toronto, in a clash that resulted in four arrests. Alaa and other demonstrators hid their faces in bandannas and ski masks while carrying posters and chanting, “Nazi scum, off our streets.”

Amid the scuffle, a video was filmed of protesters shouting at and blocking Dorothy Marston, 81, as she tried to enter the venue on a walker and get around the crowds. She eventually made it inside the event with the help of police, but almost instantly, the clip of the confrontation went viral.

And Alaa found himself doxed. A Twitter user identified him in an Oct. 1 tweet, calling him one of the “scumbags” who had harassed Marston. His name and information spread across the Internet, retweeted by the likes of conservative pundit Ann Coulter, as did his ties to the restaurant.

In a statement on Tuesday, the Alsoufis admitted Alaa had been involved in the protests.

“Alaa regrets the incident that occurred in Hamilton this past weekend,” they said. “That said, he did not in any way verbally or physically assault the elderly woman and has nonetheless offered to apologize personally for not doing more.”

But it wasn’t long before threats began flooding into Soufi’s Facebook page and email, including some with menacing remarks about torture and violence. The Alsoufis said that earlier this week, Alaa had been physically assaulted. (Police haven’t commented on this claim.)

The attacks and hate-filled messages had proved to be so much that the family said it had no choice but to close Soufi’s permanently.

“We could not put our family members, staff, and patrons in danger,” the family said in a statement. “The magnitude of hate we are facing is overwhelming.”

This week, the white doors to the restaurant were shuttered, the windows covered in the yellow T-shirts reading, “From Syria, with Love.” Patrons and neighbors passed by to drop off flowers and leave messages of support to the family and restaurant, expressing shock at the violent messages directed toward the family.

“We have the rule of law in Canada,” one man told CityNews Toronto. “We don’t issue death threats. This is not that kind of country.”

Canadian Prime Minister Justin Trudeau chimed in, writing on Twitter on Tuesday, “Hatred and threats of violence have no place in Canada. We are always stronger together than when we’re divided.”

Hatred and threats of violence have no place in Canada. We are always stronger together than when we’re divided. https://twitter.com/suresh/status/1181587404693614592 …

This is heartbreaking and upsetting. Soufi’s on Queen West is closing. 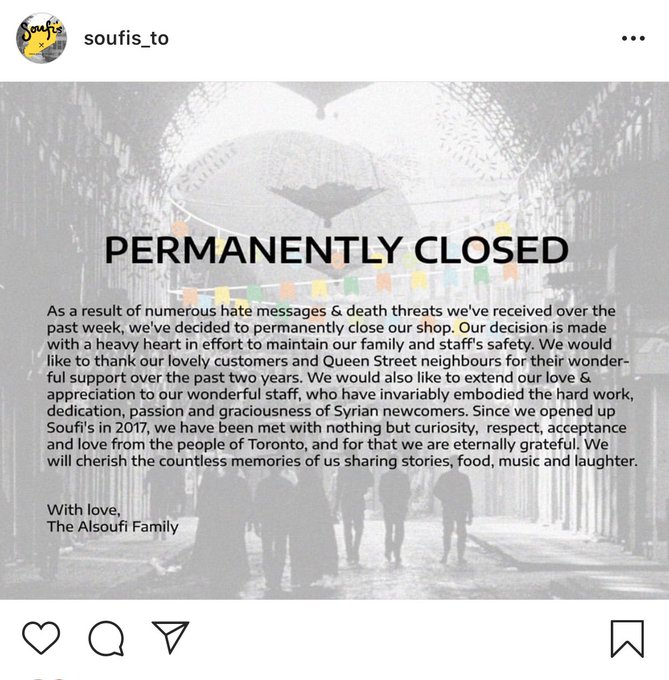 2,996 people are talking about this

Even the son of Marston, the elderly woman at the protest, condemned the attacks on the Alsoufi family in an interview with the Toronto Star.

“I’m absolutely ashamed of anybody who called and threatened them. That’s how polarized Canada is becoming. We have lost our ability to see reason,” David Turkoski said. “We don’t like war and persecution of anybody.”

A spokesperson for Toronto police told The Post that officers had begun investigating threats against the restaurant. And on Wednesday, the family changed course, saying that it would reopen the restaurant with the help of Mohamad Fakih, a prominent Lebanese-Canadian businessman.

“This family should not lose their profitable, thriving business because of intimidation and hate,” Fakih said.