Anti-BDS Website Seeks To Ruin Careers, Reputations Of Those Who Support Palestine 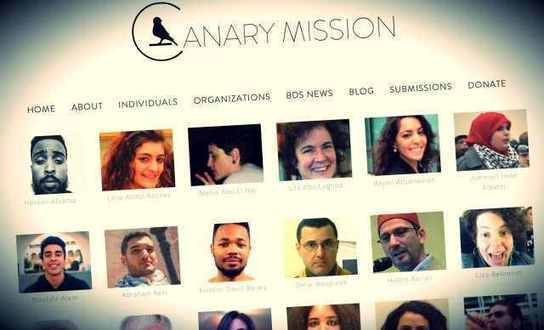 A website that profiles activists from the Boycott, Divestment and Sanctions (BDS) movement with the goal of ruining their careers is coming under fire, with some comparing it to McCarthyism.

The Canary Mission features profiles of dozens of activists, students, college professors and journalists which the site’s authors accuse of anti-Semitism and even having ties to terrorism. Among the alphabetical listings on the site is a profile of this journalist, along with over 100 others.

The organization’s goals are clear: It seeks to ruin the careers or future job prospects of its targets, especially students associated with the growth of BDS on American college campuses. “By shining a light on hate group members and their activities, the public will become better informed about those involved in hate movements in their communities,” the Canary Mission explains on its About page. A video on the site warns: “It is your duty to ensure that today’s radicals are not tomorrow’s employees.”

Linking supporters of Palestinian liberation with anti-Semitism is a tactic that’s growing in popularity alongside the success of the BDS movement. Even Hollywood executives have sought to repair Israel’s image by linking support for Palestine to attacks on Jews and their faith.

Little is known about the origins of the site, which launched in mid-May. It claims to be operated by “students and concerned citizens motivated by a desire to combat the rise in anti-Semitism on college campuses” but provides no links to the names of its staff or funding sources. Although the organization’s Donate page claims it is a nonprofit organization, a May investigation by the The Jewish Daily Forward revealed that “no group called Canary Mission is currently registered with the IRS as eligible to receive tax-deductible contributions, and the website indicates no fiscal sponsor through which it can accept donations.”

A September follow-up report does reveal some of the organization’s apparent ties to other pro-Israel groups. Josh Nathan-Kazis, a staff writer for The Forward, noted that, in August, the Canary Mission linked, most likely inadvertently, to the personal Twitter profile of Warren Betzalel Lapidus, “the editorial director of an online Israel advocacy operation called Free Middle East. He also works as a freelancer for an online Israel advocacy training group called VideoActivism,” which trains students in pro-Israel advocacy.

Further evidence of ties between the two organizations is a VideoActivism video that opposes the Iran deal that uses the same narrator as the video from the Canary Mission website. However, Jonathan Bash, CEO of VideoActivism, denied ties to the group and claimed the use of the same narrator was just a coincidence.

Rebecca Pierce, a filmmaker, who was profiled by Canary Mission for her public opposition to Islamophobic remarks by a University of California Santa Cruz professor, likened the Canary Mission’s tactics to McCarthyism, a common accusation from BDS activists in media reports about the site.

“The website is filled with racist stereotypes about our activism, and intentionally tries to tie a diverse non-violent student movement to antisemitism and terror,” Pierce told The Guardian in May. Although concerned about the effect the site could have on her future job prospects, she added, “I stand behind my activism and won’t allow racist extremists to intimidate me.”

Mark Oppenheimer, a writer for the Jewish news site Tablet, concurred with this comparison to Sen. Joe McCarthy’s 1950s anti-Communism crusade. But he also pointed out one major difference: “The good senator from Appleton, Wisc., was willing to show his face.”

Oppenheimer wrote that Canary Mission “makes pro-Israel activism—or at least anti-anti-Israel activism—look ridiculous.” He was unflinching in his criticism of the organization’s tactics:

“What’s most disconcerting about Canary Mission—even more than its secret funding—is how it reveals the gap between Judaism and what passes for Zionism. In its anti-intellectualism, indifference to truth, avoidance of honest debate, resistance to subtleties, and utter lack of irony or whimsy, the text of Canary Mission reads like rank fundamentalist backwash; it’s totally alien to the best traditions of Torah, rabbinics, and secular Jewish literature.”