Arab Poets in the US: 'American Poetry is More Brave than It’s Ever Been'

A doctor who excavates the dead on to the page and an English professor who muses whether poets can serve as journalists are two of the writers who picked up prizes at this year’s Arab American Book Awards. The prizes, which were established in 2006 by the Arab American National Museum in Michigan, highlight books written by and about Arab-Americans.

This year, there are six winners, all of whom were honoured at an awards ceremony at the museum on Saturday. First-time winner Fady Joudah – a poet, doctor and translator – picked up the poetry award for his fourth collection, Footnotes in the Order of Disappearance. Joudah, who was born in the United States and grew up across the Middle East, said the prize “had a special meaning” as it helped him to “recognise my belonging” to the Arab-American literary diaspora.

“The prize for me is about creating a lineage, or document, of Arab-American or Arab-anglophone writers and thinkers. It’s not about the noise or splash it is able to make, but about belonging to a community that obviously doesn’t go away, and will not go away.”

It’s about us reaching the moment we are able to read one another’s work and realising how much heritage, traditions and history we share.

Reading Joudah’s collection is an emotional journey. There are many heart-­rending, tender, sad and beautiful moments. After Wine is one such poem. It was written in collaboration with Syrian-Kurdish poet Golan Haji and speaks of a former crush being suddenly killed by a bomb: “Faces of the dead on Facebook will wait for your walk home. A woman who awakened your first lust when you were a kid was killed in the morning while talking to her sister on the phone. First a blast then stillness.”

In the poem 38, 7, 31, 4, Joudah recalls watching news footage about what appears to be a massacre and his parents recoiling, intimating they may have experienced something similar: “My parents standing in a silence that drove them out of / the room as if they’d watched their bodies decompose.”

Bodies, whether they are living, sick, dead or decomposing, litter the collection. What drives him to write in such detail about such horrific experiences, and so

intricately about the physical body? Joudah is pragmatic.

“Once we recognise we are going to die in our bodies, and because of them, it becomes really an obsession. So much of life falls into that: love, desire, grief, having children or not having children, possession, materialism. It’s all in the body. It’s hard for us humans to escape that – we can’t get out of the physical body.”

But Joudah isn’t afraid to get spiritual, too, and not only with Islam. His poems deal with religions from around the world. It is, in part, he says, a result of seeing the interconnected world his children must now navigate.

“For me, it’s part of Arab culture. It doesn’t matter what relationship you have to religion. If you go through the book, these kind of things pop up unexpectedly. The Scream has a reference to Abel and Cain. Bloodline is a poem that speaks with Jews. Almost Your Life has a reference to Muslims. Corona Radiata is a mystic poem in a Sufi style,” he says. “It’s about us reaching the moment we are able to read one another’s work and realising how much heritage, traditions and history we share.”

There’s this great moment of recognition and solidarity. American poetry is now browner and more brave than it’s ever been.

Philip Metres, who has won the poetry prize twice before, is joint winner of the non-­fiction award for his collection of literary criticism, The Sound of Listening: Poetry as Refuge and Resistance. Metres is an English professor and director of the Peace, Justice and Human Rights programme at John Carroll University in Ohio.

He was “really grateful” he had won an award for the book, which weaves together a decade of his essays. “This book is not always the kind that gets a lot of attention, yet I was hoping that it says something that is pertinent to our present moment, draws upon our past and points to a future out of our current age of great panic and apocalyptic concern,” he says.

Metres, whose family is originally from Lebanon, wrote the book due to a fascination of poetry’s “meanings and possibilities”.

“The book is a series of engagements with asking what is poetry for, is it necessary, and if so how?”

Congrats to all the winners, including @Lena_Mabsutina and Fady Joudah, and to other Arab American writers whose books in 2018 were game-changers, especially @marwahelal‘s Invasive species. https://twitter.com/CopperCanyonPrs/status/1176551125237084165 …

Congratulations to PHILIP METRES, author of the forthcoming poetry collection SHRAPNEL MAPS (2020), on winning the @ArabAmericanMus Book Award in Nonfiction for his book of essays The Sound of Listening: Poetry as Refuge and Resistance! http://www.arabamericanmuseum.org/bookaward 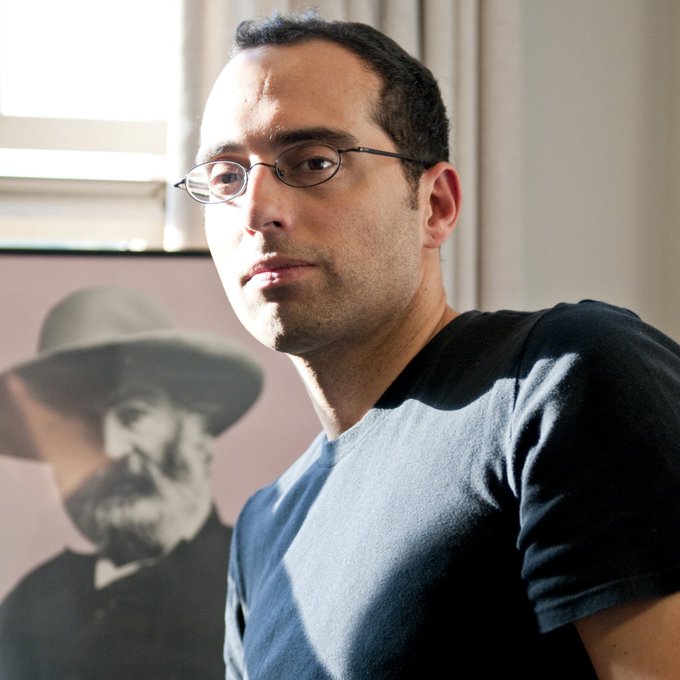 One of the essays that is close to Metres’s heart is about celebrated poet Khalil Gibran, who came from the same town as his great-grandmother and visited his family home in the 1920s. Reflecting on the piece, Metres said that whenever his work received recognition, he felt he had “honoured my ancestors who made a real journey here, made a life here, and didn’t forget where they came from”.

A recurrent theme in Metres’s book and his work in general is using poetry to elevate “unheard voices”.

Similarly, his new poetry collection, Shrapnel Maps, takes on Palestine and Israel. “I had many late nights thinking about this one, and I decided if I’m going to say something, I’m going to say it now, and I’ll try to say it in the best way I can,” he said. “There’s no waiting in life. You just have to take risks.”

One of the poems from Shrapnel Maps is about the Israeli poet Yehuda Amichai.

Metres said he wondered how Amichai, “in his greatness, could not have seen Palestinians”. The poem was published at the end of the October, and Metres said he was surprised that he had received more critiques on the background note attached to the poem than the poem itself. He anticipated having “really interesting” conversations about this book.

Looking more broadly at Arab-American poetry, Metres said he was happy with its current trajectory. “In a Trump era, there’s a much broader engagement by people of colour in poetry. Arab-American writers find themselves along writers of colour, articulating their experiences,” he said.

“There’s this great moment of recognition and solidarity. American poetry is more brave than it’s ever been.”

Illustrious Arab Poets Through The Centuries