END_OF_DOCUMENT_TOKEN_TO_BE_REPLACED

As America Rages, the Middle East Watches with Surprise — and Some Schadenfreude

Police vehicles crashing through crowds. Journalists shot at or arrested. Officers and self-appointed militiamen threatening protesters. As images of America’s rage explode on screen, people across the Middle East — no strangers to discontent, thoughts of revolution or the heavy-handed response of security forces — have been struck by scenes more often associated with their own region than with the world’s superpower.

The discord blooming across dozens of U.S. cities, which began after the death of George Floyd, an African American who died after a white Minneapolis police officer pinned Floyd’s neck to the ground with his knee, has exposed America’s tortured reckoning with questions of race and privilege.

But it has also resonated here in the Middle East, with many seeing in the U.S. protests — not to mention authorities’ often-aggressive response — echoes of the uprisings that exploded in the region over the last decade.

Lebanese activist Sarah Aoun, who shuttles between Beirut and Brooklyn for her human rights work at the Open Technology Fund and has taken part in protests in both cities, is struck by the similarity of the footage out of Minneapolis to what she and her friends have experienced in Lebanon, one of several Arab countries facing spasms of anti-government demonstrations.

“We’re dealing with systemic inequalities in both places and continued oppression of both peoples,” Aoun said.

She joined 11 other Lebanese technologists, protesters and activists in publishing a document packed with hints on what to bring to demonstrations and how to handle police abuse. “Just in the same way that we in Beirut had gotten tips from Hong Kong and Chile on how to deal with the protests, we figured we’d put together a guide for people in the U.S. as a show of solidarity,” Aoun said.

We wrote a quick guide for US folks, combined by Lebanese activists, protesters, and revolutionaries (cc @aemasri). Contains info on protest safety, tear gas, + other hacks.

From #Lebanon to #Minneapolis, solidarity everywhere

Thread below, and guide: https://github.com/frombeirutwithlove/ProtestTips/blob/master/WhatToDo.md … 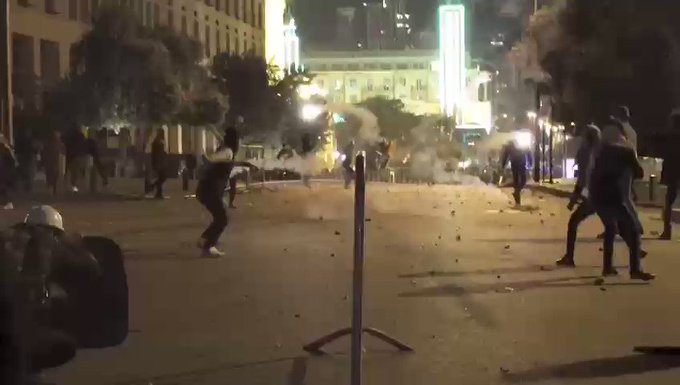 6,857 people are talking about this

Over the weekend, activists tweeted their support to those demonstrating in the U.S. under the hashtag #AmericaRevolts, modifying the slogan for Lebanon’s protest movement, which used the hashtag #LebanonRevolts.

Aoun said the aggressive crackdown on protesters in some U.S. cities could change general perceptions there of law enforcement. “In Beirut, there’s no pretense of the army and police being on the people’s side; we knew that from the beginning,” she said. “But in the U.S. you assume police are peacekeepers, and instead what they’re doing is declaring war on their own citizens.”

For Mohamad Bazzi, a Lebanese American journalism professor at New York University who covered the Middle East during the 2003 U.S. invasion of Iraq, the constant stream of helicopters over Lower Manhattan, the charred debris and the smell of burning tires near his neighborhood reminded him of the unrest he had seen in Baghdad and Beirut, two Arab capitals that for months have seen protesters wounded and killed at the hands of riot police not above employing thuggish tactics.

“The way [authorities] treated protesters with immense violence, and then to see the protesters, or some elements of them, resorting to violence — it was hard for me not to see these parallels, of U.S. troops in the Middle East and local armies,” Bazzi said.

There has also been schadenfreude, with some noting then-Defense Secretary Donald Rumsfeld’s justification of looting after U.S. troops invaded Iraq as “part of the price of getting from a repressed regime to freedom.” When some U.S. officials invoked Iraq or Syria while speaking of the unrest in their cities, many here were outraged, and pointed out that America’s foreign policy in the Middle East had instigated much of the strife now associated with their countries.

“The hypocrisy stretches to the United States routinely condemning human rights abuses in Iraq and other Middle Eastern nations, painting itself as a global beacon for liberty, while American minorities face disproportionate police cruelty,” said Haider Sumeri, an Iraqi analyst. 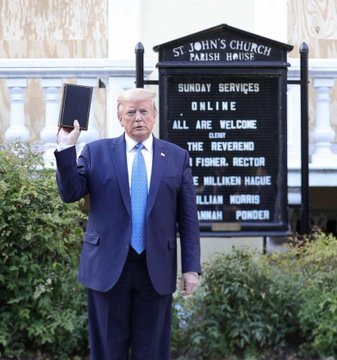 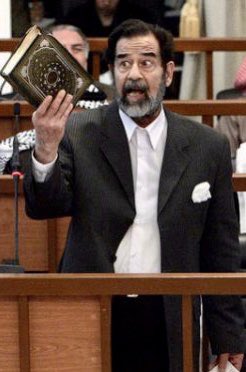 2,276 people are talking about this

President Trump has been denounced for a take-no-prisoners rhetoric reminiscent of Middle East autocrats. On Friday, Trump tweeted, “When the looting starts, the shooting starts,” a statement that got him flagged by Twitter. He doubled down on that harsh approach Monday, saying in a speech he would deploy the military and “I want the organizers of this terror to be on notice.”

“What you have in the U.S. and what you have in the Arab world are exactly the same: a pauperized citizenry rising up against a militarized state and system,” Khouri said. “And the system has responded with more security and force, curfews, the National Guard — and of course the president eggs them on.”

Trump and U.S. officials such as Sen. Marco Rubio (R-Fla.) have also blamed the unrest on outside agitators, including the anti-fascist movement antifa, and even on “foreign adversaries” like Russia.

Hearing that rhetoric from American officials, said Karl Sharro, a Lebanese British satirist who lives in London, brings “a sense of irony.”

“Western liberals tell us ‘You Arabs are always blaming your problems on others and have conspiracies on the mind.’ Then they blame everything on Russia,” he said. “You can’t dismiss our entire societies and then, at the slightest whiff of trouble, you adopt a very conspiratorial attitude.”

But some also noted the hypocrisy of regional reactions, especially from governments adversarial to the U.S. In Syria, where mostly peaceful demonstrators in 2011 faced live fire and then a civil war that is estimated to have killed at least 400,000 people, activists mocked state-affiliated channels decrying U.S. authorities’ use of excessive force even as they ignored Syrian government troops’ use of bombs on areas with civilians.

Others pointed out that regional support for African Americans comes as the Arab world grapples with the mistreatment of migrants from Africa and Asia in construction jobs and domestic work. That treatment has pushed many migrants to suicide, and caused some of their home countries to restrict visas to nations like Lebanon, which has some 250,000 foreign domestic workers.

“We need to face our own shame for decades before we even look a black protester in the face, much less make it seem we are with them in the same struggle shoulder to shoulder. You cannot be a supporter of black people abroad and silent/complicit about what is going on at home,” Tarek Zaidan, the executive director of Helem, a Lebanese nonprofit organization working on improving the legal and social status of LGBT people, wrote in a Facebook post this week.

“You want to show solidarity with people in Minneapolis? Start by giving every African and South Asian woman who lynched herself on an Arab balcony for the past century life-affirming justice.”