Music Therapy The therapeutic value of music was discovered by the Arabs as medieval hospitals hired musicians to play sweet music at night to soothe the sleepless.

Celebrity relationships and friendships are a rare breed. These famous faces have their lives played out in front of the masses, whether it’s the good, the bad, or the straight-up shady. In Elite Daily’s new series, It’s Complicated, we’re highlighting the biggest celebrity “feuds” that took over Hollywood and dominated our Sunday brunches for weeks on end. We’ll take a deep dive into the lives and social media feeds of our favorite stars and dissect what happened in front of the camera, what went down behind the scenes, and everything you might have missed in between.

Zayn Malik and Gigi Hadid are one of the hottest “it” couples in Hollywood, but their popularity isn’t for lack of ups and downs throughout their four-year relationship. They’ve been on, they’ve been off, and there were times fans had no clue where they stood. But after reading Zayn and Gigi Hadid’s quotes about each other, you’ll know one thing for sure: No matter what Malik and Hadid have endured in the past, they’ve always got each other’s backs.

At the start of 2020, Zigi shippers weren’t clear on Zayn and Hadid’s relationship status, but Hadid seemed to let the cat out of the bag when she shut down social media star Jake Paul for dissing Malik in a random Twitter rant on Feb. 23.

In a now-deleted tweet, Paul said he “almost had to clap up” Malik because he had an “attitude” and was just angry because he “came home alone to [his] big ass hotel room.” Hadid destroyed Paul in a Twitter reply, writing, “He doesn’t care to hang w you and your embarrassing crew of YouTube groupies ..? Home alone with his best friends like a respectful king cause he has me, sweetie.”

They Gush Over Their On-Screen Romance

Despite calling Hadid a “good friend” in an interview with Apple Beats 1 radio on Jan. 28, 2016, the pair spurred relationship rumors a day later when they exchanged flirtatious tweets about Malik’s steamy new “Pillowtalk” video, which featured Hadid.

Malik got the ball rolling by calling her “babe,” but Hadid turned things up a notch by gushing over Malik’s looks.

Jokes.. I wasn’t looking at myself, trust me

71.9K people are talking about this

When Malik canceled his June 11, 2016 performance at the Capital Summertime Ball due to anxiety, Hadid tweeted how proud she was of him for being vulnerable with his fans.

“Z — I’ve seen the battles you go through and the way you fight to get to a place that allows you to get up there for your fans,” Hadid wrote. “Your bravery in those times makes me proud, but your honesty last night proved what you’re all about, being real … Your talent and good heart will never lead you wrong. Love you and so proud of you always.” 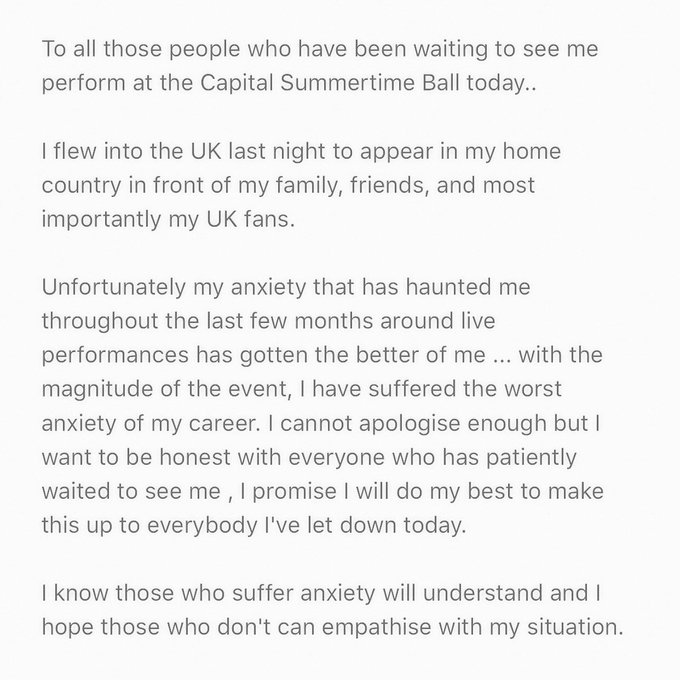 32.9K people are talking about this

They Treasure Each Other’s Intelligence

“She’s super intelligent,” he started. “I think that’s why it works so well. And we do the same type of job, so we get that with each other.”

Hadid shared a similar sentiment when asked about Malik’s most attractive quality in a September 2016 interview with Evening Standard. “I would say his brain,” she said. “We cook a lot together and do art together and we’re each other’s best friends. We both feel we can talk about anything and learn a lot from one another.”

Hadid Is Malik’s No. 1 Priority

Speaking to Us Weekly in September 2017, Malik revealed the keys to his successful relationship with Hadid.

“There are a lot of people who are too busy in each other’s lives,” he said. “I just concentrate on my relationship and try to do right by my girlfriend and she does by me, and we hope for the best, as we all do.”

Malik Brings Out The Best In Hadid

Hadid almost moved her followers to tears when she posted a sentimental birthday message to Malik on Instagram on Jan. 12, 2018. “Love this man more than I could ever put into words, & am inspired by his drive to be and do better everyday,” she wrote. “Cheers to YOUR YEAR my @zayn – happiest happiest birthday & 25th year of life !! I’m proud to be by your side.”

They Love & Respect Their History Together

After The Sun broke the news Zigi broke up on March 13, 2018, both Malik and Hadid confirmed the report on social media, but not without writing a few truly touching words about each other.

“Gigi and I had an incredibly meaningful, loving and fun relationship and I have a huge amount of respect and adoration for Gigi as a woman and friend,” Malik tweeted. “She has such an incredible soul.” 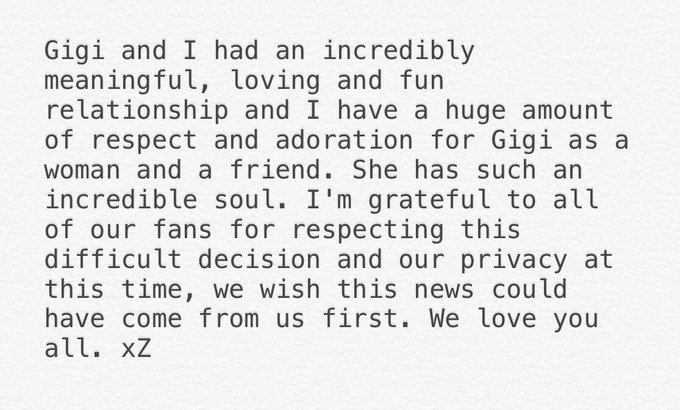 108K people are talking about this

“I’m forever grateful for the love, time, and life lessons that Z and I shared,” Hadid wrote on Twitter. “I want nothing but the best for him and will continue to support him as a friend that I have immense respect and love for. As for the future, whatever’s meant to be will be.”

54.8K people are talking about this

The couple couldn’t stay away from each other for too long, however. TMZ snapped photos of them kissing about a month later.

Even though the on-again, off-again couple’s official relationship status was unclear at the time, Malik opened up about the impact she had on his life during a June 2018 interview with GQ.

“We’re adults. We don’t need to put a label on it, make it something for people’s expectations,” he began. “I had a very negative outlook on things. That might have been adolescence or testosterone or whatever the f*ck was running through my body at the time. She’s helped me to look at things from a positive angle.”

By August 2018, Zigi was officially back on. Hadid was even wearing a chain that read “Zayn” around her neck.

That October, Hadid seemed to refer to Malik as her “home” in a now-deleted Instagram post. “Flyin’ home to my happy place,” she wrote under a selfie of her and Malik cuddling, according to Access.

Unfortunately for Zigi fans, a Jan. 2, 2019 E! claimed the couple was “spending time apart” and had been since November 2018.

Hadid Is Unlike Any Other Woman To Malik

When Malik went on an emotional Twitter rant on April 4, 2019, tweeting, “go f*ck yourselves with your irrelevant bullsh*t,” some fans assumed he was talking about Hadid. But he cleared that up quickly, calling his ex “the most amazing woman I’ve ever known.”

34.4K people are talking about this

Come Feb. 14, 2020, Hadid was hinting she and Malik were back together when she called him her “Valentine” on her photography-based finsta account.