Independence Oman is the oldest independent state in the Arab world.

Abu at-Tayyib Ahmad bin Al-Husayn al-Mutanabbi al-Kindi is known as one of the most recognized and prominent poets of the Arabic language. He even had his poems praised by kings in the middle east during his lifetime! Also, his work is so influential that it has been translated to over 20 languages worldwide and he has written over 326 pomes. Here is his story.

Where he started from

Al-Mutanabbi was born in Kufa, Iraq on 915. Kufa is now known as Najaf. Al-Mutanabbi came from extremely humble beginnings. His father was a water carrier who was from the Kindah tribe. The Kindah tribe goes all the way to the 2nd century BCE and was a noble kingdom. Al-

Al-Mutanabbi was extremely smart and cunning. He came up with the idea claim that he was a predecessor of the prophet Saleh so he could receive education in Damascus, Syria. Interestingly, Saleh is mentioned in the Quran and prophesied to the tribe of Thamud before Mohammed had become a prophet. He also made himself known for his poetic gift at an early age which helped him also. In 924, Shi’ite Qarmatians attacked kufah and Mutanabbi chose to join them. He lived among the Bedouins, a nomadic Arab tribe, doing research on their doctrines and texts.

Al-Mutanabbi then told the Bedouin people that he was a prophet. This is how he earned the name Al-Mutanabbi which means, “The Would-be Prophet.” However, Al-Mutanabbi didn’t use his status for personal gain. Just like the purpose of his revolutionary poems he used his status to lead a revolt in Syria on 932. After being imprisoned for 2 years he decided to become a traveling poet. He started to write the poems he is famous for at this stage.

Al-Mutanabbi and the Prince 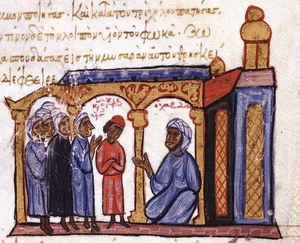 Al-Mutanabbi started to write some of his famous panegyrics in 948. Panegyrics are a type of formal speech or written verse that is used to highly exalt someone or something. He made these in praise of the rulers of Syria. In 948 he became a close friend and confidant to Sayf al-Dawla. Coincidentally, Sayf al-Dawla was a Hamdanid poet-prince of northern Syria. Therefore, it is of no surprise Al-Mutanabbi and he would become close. They were so close that Al-Mutanabbi served under the prince’s court.

Al-Mutanabbi stayed in the court of Prince Sayf Al-Dawla for 9 years. During this time he wrote beautiful and complex panegyrics in praise of the prince. Furthermore, these are considered the masterpieces which have earned him recognition all over the Arab World. However, although his poetic talent was flourishing in Syria Al-Mutanabbi soon had to leave. One reason is that many of the other poets in the prince’s court had become jealous of Al-Mutanabbi. So much so that they saw him as a rival than a part of their homeland. Also, the prince became upset with Al-Mutanabbi’s political goal to become a Wali which is Arabic for governor. The prince saw this as a threat and betrayal. In short, all of the toxicity around Al-Mutanabbi caused him to leave Syria for Egypt. 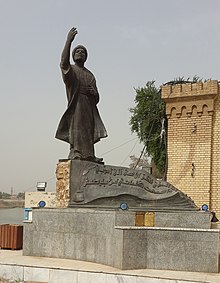 Al-Mutanabi died on 965. He died because he was using his basic human rights. He died because of free speech. Al-Mutanabi wrote a poem that insulted a man named, Ḍabbah al-Asadī. Dabbah in a fit of ignorance and blind rage chose to follow Al-Mutanabi to Baghdad. At first, Al-Mutanabi was going to flee with son, Muḥassad, when Dabbah caught up to him. However, one of his servants reminded him of his courageous poems. Therefore at that moment, Al-Mutanabi decided to fight with a conviction for his beliefs. He fought valiantly but died with his son and friends.

In honor of him, the people of Baghdad have named a street after him called, Mutanabbi Street. On that street is also a statue of him created by Iraqi sculptor, Mohammad Ghani Hikmat. It was created in the 1960s and still stands strong just as Mutanabbi’s poems stay timeless.

Here are some examples of the beautiful and enlightening poetry Al-Mutanabbi made:

When the lion bares his teeth, do not
fancy that the lion shows to you a smile.
I have slain the man that sought my heart’s blood many a time,
Riding a noble mare whose back none else may climb,
Whose hind and fore-legs seem in galloping as one,
Nor hand nor foot requireth she to urge her on.
And O the days when I have swung my fine-edged glaive
Amidst a sea of death where wave was dashed on wave!
The desert knows me well, the night, the mounted men
The battle and the sword, the paper and the pen

Wounded and fleeing, heroes passed you by, while your face remained bright and your lips, smiling.
You surpassed the bounds of courage and understanding until people claimed that you knew the unseen.
To you belongs the praise for these pearls I pronounce; you are the giver, I the arranger.
Oh, Sword never sheathed, whom none can doubt and from whom there is no refuge.
Blessed are warfare, glory, and eminence; blessed are your subjects and all of Islam, for you are safe!