It’s set to make its debut at the Toronto International Film Festival this week, but Sweetness in the Belly is already making headlines ahead of its premiere.

The drama, directed by Zeresenay Berhane Mehari, is an adaptation of Camilla Gibb’s 2005 novel of the same name, which follows an orphaned girl who grows up in Morocco and Ethiopia but then flees to the UK after the onset of Ethiopia’s civil war.

The lead character, Lilly Abdul, is depicted in the film by Dakota Fanning, who this week came under fire for portraying a Muslim refugee in a casting choice compared to whitewashing.

In the novel, however, Abdul is also portrayed as a white woman, who was raised in Africa before moving to the UK after her parents were murdered. In England, she struggles to find her place in the unfamiliar country, though goes on to gain employment as a nurse and refugee worker, finding comfort in the friendship of fellow immigrants.

In a clip released exclusively to Deadline this week, American actress Fanning is captured wearing a hijab and speaking Arabic to co-star Wunmi Mosaku.

People in Ethiopia primarily speak Amharic, but the line she quotes seems to be religious, hence why she would be talking in classical Arabic.

“Whosoever alleviates a burden from a believer, Allah will alleviate his burdens in this world and the next,” Fanning says in the short scene, before Mosaku tells her she is “full of surprises”.

Arabic speakers at The National couldn’t actually understand what Fanning was saying when first watching the clip. “The second line is fine,” said one Arabic speaker, “but the first line is gibberish.”

The scene’s release sparked debate on social media, with many criticising the 25-year-old’s portrayal of a displaced individual.

This is so coincidental – just yesterday I was saying, you know who would best represent the contemporary refugee experience in Africa? Dakota Fanning. https://twitter.com/deadline/status/1169262378719956992 …

‘Sweetness In The Belly’: First Clip Of Dakota Fanning As A White Ethiopian Muslim In Refugee Drama-Romance – Toronto http://dlvr.it/RCSdzB 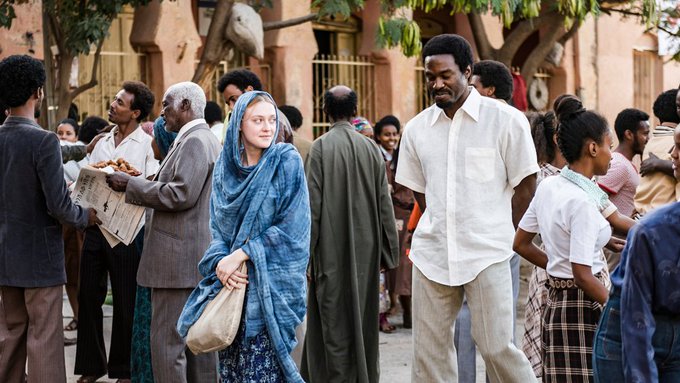 635 people are talking about this

“This is so coincidental – just yesterday I was saying, you know who would best represent the contemporary refugee experience in Africa? Dakota Fanning,” one person wrote on Twitter.

‘Sweetness In The Belly’: First Clip Of Dakota Fanning As A White Ethiopian Muslim In Refugee Drama-Romance – Toronto http://dlvr.it/RCSdzB

2,042 people are talking about this

The website of the Black Entertainment Television channel described the film “as yet another African story centred around a white saviour”.

“It would be bad enough if the film was based on a true story, Green Book-style, but it only makes matters worse that it’s completely fictional,” BET.com added.

Fanning herself took to social media to clarify her role, reiterating that Abdul is a woman of Britiish heritage in the book, despite social media commenters suggesting the part should have gone to a woman of colour.

“In the new film I’m part of, Sweetness in the Belly, I do not play an Ethiopian woman. I play a British woman abandoned by her parents at seven years old in Africa and raised Muslim,” the I Am Sam star wrote.

“My character, Lilly, journeys to Ethiopia and is caught up in the breakout of civil war. She is subsequently sent ‘home’ to England, a place she is from but has never known.

“Based on a book by Camilla Gibb, this film was partly made in Ethiopia, is directed by an Ethiopian man and features many Ethiopian women. It was a great privilege to be part of telling this story.”

The film which also stars Kunal Nayyar and Yahya Abdul-Mateen II, will show at the Toronto International Film Festival on Saturday, September 7.

Tiff officially begins today, and will run until Sunday, September 15.