SAHTEIN! Arabic Recipe of the DayAshura

Yogurt Yogurt can be traced back eight thousand years and is believed to have been discovered by accident by the Bedouins of the Arabian Peninsula.

Lebanon has nominated investment banker Ziad Hayek to be president of the World Bank, following Jim Yong Kim’s surprise resignation in January and US President Donald Trump’s subsequent nomination for a successor this month.

Lebanon’s nomination is the only challenge so far to Mr Trump’s proposal that Treasury official David Malpass replace Jim Yong Kim as head of the development bank.

Mr Hayek, who is secretary-general of the Higher Council for Privatisation and Public-Private-Partnerships in Lebanon, announced his nomination by the nation’s finance minister in a tweet on Monday night.

“Proud to have been nominated by Lebanon for the position of President of the World Bank Group!” he wrote. He shared a copy of the nomination letter to the bank’s executive board – which states that, “Mr Hayek fulfils the qualification requirements set by the World Bank and has demonstrated, throughout his career – spent almost entirely working in emerging markets, and in both the public and private sectors – a passion for the development, both social and economic, of countries throughout the world.”

Under an informal transatlantic custom, the president of the World Bank has always been an American, while the managing director of the International Monetary Fund has always been European, according to Bloomberg. But some experts are calling for a non-American to be chosen in recognition of the growing global importance of emerging markets.

The final decision will be made by the World Bank’s executive board, which represents its 189 member nations.

As secretary-general of Lebanon’s high council for privatisation, Mr Hayek has been working to reform the

country’s power and telecommunication industries. He was previously chief executive of investment bank Lonbridge Associates, as well as a consultant to the US Department of State and a member of the Council on Foreign Relations. 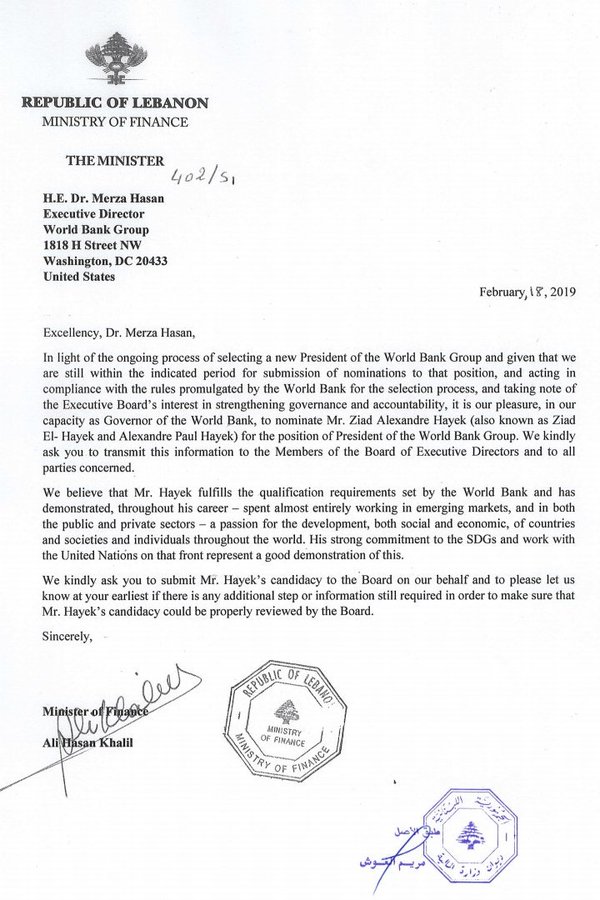 Proud to have been nominated by Lebanon for the position of President of the World Bank Group!

Lebanon last month instated a new government following a nine-month political impasse, and is expected to ramp up the implementation of crucial consolidation measures to reverse years of economic decline. The economy has been hit by the war in neighbouring Syria, with annual growth rates falling to between 1 and 2 per cent, compared to 8-10 per cent in the pre-war years.

It is due to work on implementing an $11bn aid package pledged by international donors at the Cedre conference in Paris last April, intended to boost high-growth industry sectors.

Mr Malpass is a vocal sceptic of global organisations such as the World Bank, saying they “have grown larger and more intrusive” and “the challenge of refocusing them has become urgent and more difficult”, according to the US political media company Politico.