Olive Oil's Healing Powers The people of early civilizations in the Arab World believed that olive oil would cure every illness known to man.

Lena Chamamyan Reflects her Culture with Latest Song 'I am Syrian

Musical trailblazer Lena Chamamyan reflects her own culture through her music, a fusion of traditional Eastern songs from the Arab world and Armenia with a touch of Western style

Syrian artist of Armenian origin Lena Chamamyan is considered one of the best singers of her generation. Chamamyan, who blends traditional songs of the Middle East with Western instruments and interprets them in a unique style, started her music career with a concert that she gave at the age of 5. The artist, whose father is from Kahramanmaraş province while her mother is from Mardin province, told Anadolu Agency (AA) that Istanbul has a very special place for her, and she is always pleased to come to the city.

Explaining that many of her works that remind people of Damascus and Aleppo take place in Istanbul, Chamamyan added, “Istanbul has a special color and taste. This taste reflects on Turks and Syrians who live in Istanbul. Besides, people listen to music so much here. They have a fine ear for music. Wherever I go in Istanbul, the music played in streets and cafes are so quality.”

The young artist remarked that she is planning to give a concert in Istanbul again soon, after the tickets of her latest concert in the city were sold out very quickly. 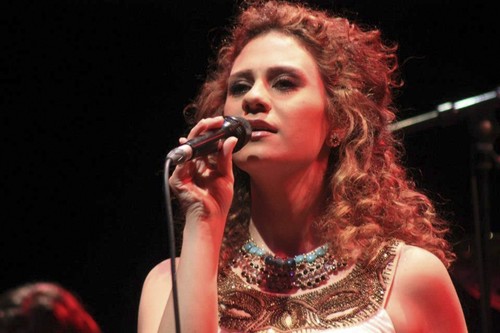 “I was so surprised when I saw the attention of the people in Istanbul in my first concert here in 2013. Although I perform only Arabic and Armenian songs, the interest was great. When I look at social media, I see that my songs are shared most from Istanbul. Mostly Turks share them not Arabs or Syrians living here,” she continued.

‘Music is a reflection of each person’s soul’

Lena Chamamyan emphasized that the works that she prepared with jazz, folk, oriental, fado, Sufi, African and Latin melodies carry traces of the Armenian culture, in which she was born and raised, underlining that she is always in search of innovation in music.

Adding that music is a reflection of each person’s own soul, the young singer stressed, “In my works, I can never leave aside the paintings in my mind and the sounds in my ear because of the culture I have. For me, these become an integral part of Eastern and Western music. If I have to explain, I try to reflect what is happening in my mind to my music.” When the young artist was trained in classical Eastern music and began to sing her works for the first time, she was criticized by classical music artists. She stated, “As time passed, I could understand better why they had criticized me. They thought that adding a new note into Arabic music destroy its sacredness. In the beginning, my family objected me to become a musician. When they see I am successful, they gave me support.”

Highlighting that she was trained by European and Russian musicians, Chamamyan mentioned that she provides education in order to transfer her own culture’s music to future generations.

‘I tried to go beyond the usual in everything I did’

The artist, who released her first album “Hal Asmar Ellon” in 2006, said, “After the 2000s, concerts were held in historical places in Syria. I was a student at that time. As a student, I took the stage in these concerts with various bands. After the concerts, many listeners started to ask me whether I have an album or not. This request helped me release my first album. If something is born in the heart and produced sincerely, it really reaches out to the hearts of listeners. I could not only do with Eastern music or only Western music in my life. I have always tried to go beyond the usual in everything I do.”

Noting that she is working on French and English songs, Chamamyan said, “I will reflect the Eastern music in these works as well. I will release my new projects as not albums but singles because they are of many different types. I do not want to collect them into one album. I will be in the studio for my latest song ‘I am Syrian.'”

‘We need to protect our identity’

The artist, who lives in Paris, also touched upon the issue of the civil war in Syria.

“Life is very difficult for those who are in Syria and migrate from Syria to other countries because nothing is the same as before. Nothing is left. However, I realized that our identity would be lost, and if this identity was destroyed, then there would be no country called Syria. Therefore, we need to protect our identity.”

Chamamyan asserted that she understood better during the time she spent in Europe that Eastern culture contains a great richness.

“I saw that in the West that everyone has respect for each other even though they have a different point of view. They continue to live together but the situation is not the same in the East now. We need to learn about living together first. Everyone should do whatever they can do to realize this aim. Music is always constructive. But this situation cannot be fed by only art or music. They cannot save or support alone. ”