END_OF_DOCUMENT_TOKEN_TO_BE_REPLACED

SOURCE: THE NATIONAL
BY: CHRIS NEWBOULD

Lebanese filmmaker Nadine Labaki made history at Cannes last night as the first female Arab filmmaker to win a major prize in competition. She picked up the Jury Prize for her moving child refugee drama Capernaum, which received a 15-minute standing ovation at its premiere screening earlier in the week. 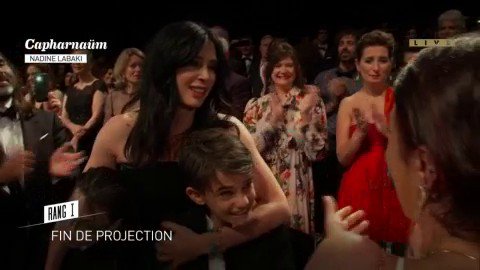 The top Palme d’Or prize was claimed by veteran Japanese director Hirokazu Kore-eda for the family drama Shoplifters, while Spike Lee took the Grand Prix for his race relations satire BlacKkKlansman, which tells the true story of a black Colarado Springs police officer who successfully infiltrates the Ku Klux Klan.

Labaki dedicated her win to the cast of her film, many of whom were impoverished or refugee children Labaki met on the streets of Beirut. “I really think about them. I hope the film will enable the voices of these children to be better heard and trigger a debate,” she said after collecting the award.

Labaki had been hotly tipped to win the top prize this year, particularly given the atmosphere at a festival taking place in the wake of the Me Too movement. Earlier in the week, 82 celebrities, including Palme d’Or jury president Cate Blanchett staged a protest on the steps of Cannes’ Lumiere Theatre demanding greater female representation at all levels of the festival. Labaki’s nomination for the top prize, meanwhile, led many to hope the Palme d’Or may be awarded to a female director for only the second time in its 63-year history – Jane Campion previously won the award for 1993’s The Piano.

Labaki, however, insisted that although she has given a strong voice to women in her previous movies, she has more immediate concerns right now given the current situation in her homeland of Lebanon, which is a temporary home to around two million refugees, mostly from Syria and Palestine.

Labaki told AFP: “There are other things bothering me now. I’m thinking of the notion of borders, of having to have papers to exist, of being completely excluded from the system if you don’t have them, of the maltreatment of children, modern slavery, immigrant workers, Syrian immigrants.”

Labaki added that she had reservations about the campaign for gender quotas in film casts and crews spearheaded by some Hollywood actresses in the wake of the Harvey Weinstein scandal: “It’s not just because we decide that there should be parity in a given domain that it is truly merited,” she said. “Whether it’s a man or a woman, it must be truly on merit.”

Elsewhere at this year’s festival, there were regional successes in the Un Certain Regard Award section for Moroccan writer/director, Meryem Benm’Barek, who picked up the Best Screenplay Award for her drama Sofia about a 20-year old Moroccan woman facing arrest after giving birth out of wedlock. Also in Un Certain Regard, Danish-based, Iranian director Ali Abbasi won the top prize for his genre defying mix of romance, mystery, social realism and supernatural horror Border, centred on a Swedish customs official with an unusually pronounced sense of smell.

The festival closed last night with a screening of Terry Gilliam’s much-delayed, postponed and aborted The Man Who Killed Don Quixote. Gilliam has famously been trying to make the film for over three decades: the hurdles and comic mishaps that prevented him were even made into a documentary, Lost in La Mancha, back in 2002. Now, 16 years later, the movie finally premiered, closing the festival, following a typically traumatic week in which it had faced a legal challenge from a former producer to stop the screening, the withdrawal of Amazon from backing the film and even a health scare for Gilliam. The screening received positive, if not glowing, reviews.