These Quick Arab Snacks are Healthy and Cheap!

By: May Shabti/Arab America Contributing Writer
In the Arab world, Arabs tend to rely a lot on quick snacks that are both healthy and easy to make or eat. Many of these quick snacks have been consumed in the Arab world for a long time. In fact, they are famous for their health benefits as well as their exquisite taste. I

Kdaameh is a very known and delicious as one of the Middle Eastern snacks. It was originated in the country of Lebanon. Many Arab parents would encourage their children to eat this snack since it is both healthy (chickpea based) and delicious. Furthermore, this snack is quite cheap and affordable. Online, you can order it for as little as 5 dollars. it’s fame has even reached the shelves of Costco.

In North Africa and the Middle East, the tradition of eating cooked lupines, well salted, has never quite died out. If you’re already in the Middle East, you can buy some pre-cooked lupines in an open-air market. Foods that contain Lupin beans are low in fat and a good source of both protein and fiber. Furthermore, this snack is very affordable and relatively cheap.  Since it’s already salted, just mix it with cumin and decorate with chopped parsley.

In the Arab world, dates have always been highly appreciated for their health benefits. With almost 7 grams of fiber in a 3.5-ounce serving, including dates in your diet is a great way to increase your fiber intake. Fiber can benefit your digestive health by preventing constipation. It promotes regular bowel movements by contributing to the formation of stool. They’re native to the Arab World and have been a part of the region’s cuisine for thousands of years. Lastly, Dates are known to be cheap.  Two pounds of dates by being purchased for 10 dollars. In addition, they are easily accessible and can be found at any local market.

Amardeen is a tasty snack in the Arab world. This snack is simply dried rolls of Apricots, which usually come prepared or can be homemade. This snack is very popular in the country of Lebanon and can be sold at any Middle Eastern market in America. This snack is quite affordable and is usually bought at the price of 8 dollars. 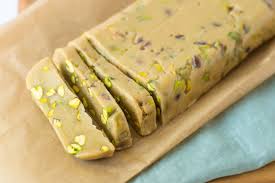 In the Arab world, Halvah is adored and recognized for its delicious and rich taste. Soft sesame halva is made from sugar, syrup, egg whites, and sesame seeds. This delicious snack is quite cheap and affordable and is usually purchased at a price of 10 dollars. It comes plain, with pistachios, chocolate taste and sugarless.  It’s consumed mostly for breakfast but also as a dessert and a snack throughout the day.

Pistachios are a well known and highly appreciated snack in the Arab world. It is an easy snack to munch on and needs none to little preparation in order to eat. In addition, Pistachios are quite affordable as well as delicious for any time of day snack!

This Arab snack can be found in any Arab household. In the Arab culture, cheese is commonly used in the majority of dishes such as main course and even desserts. Eating Cheese with a side of Olives as a snack is a flavourful and delicious choice. Lastly, luckily most cheeses are quite affordable and inexpensive, as well as olives and certainly bread!