Damascus Damascus is the oldest continuously inhabited city in the world, with records dating it back to 1500 BC, and carbon dating going back to 6300...

END_OF_DOCUMENT_TOKEN_TO_BE_REPLACED

The rebel-held Syrian region of the Eastern Ghouta has received its first aid delivery in almost three months.

It comes after weeks of appeals from the United Nations to allow aid deliveries and the evacuation of hundreds of critically ill people.

About 400,000 people live in the besieged enclave, east of Damascus, under frequent artillery bombardment.

Hundreds have been killed in recent weeks after government forces stepped up attempts to seize the area.

Wednesday’s aid delivery had enough food and supplies for 7,200 people, the United Nations Office for the Coordination of Humanitarian Affairs said.

The Syrian Arab Red Crescent, which jointly handled the delivery, said the nine trucks would cover about 1,440 families. 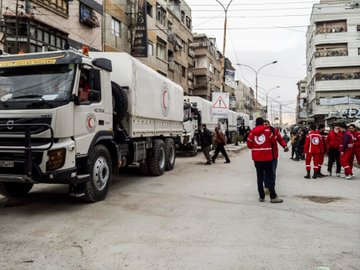 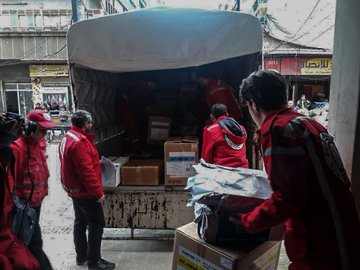 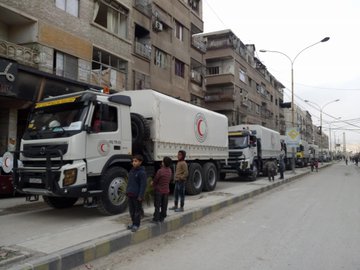 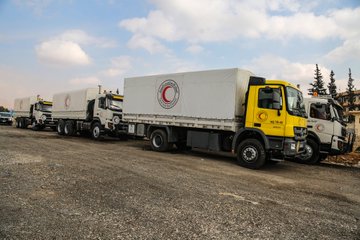 The World Health Organisation (WHO), meanwhile, said it had sent 1.8 tonnes of medical supplies – enough for about 10,000 treatments – in the delivery.

But Wednesday’s aid delivery to the Eastern Ghouta was relatively small by UN standards.

Jakob Kern, Syria director for the World Food programme, tweeted: “We need much more such convoys.”

#OnTheGround in #Syria. Finally a cross line convoy into #EasternGhouta with enough @WFP provided food for over 7000 civilians for a month. We need much more such convoys. Fighting has to stop to deliver much needed aid to all civilians in need. https://twitter.com/syredcrescent/status/963741664232787968 …

Those comments were echoed later by UN Syrian special envoy Staffan de Mistura, speaking to the UN Security Council, who said: “This is fine. But let’s think about it – that is less than 2% [of the population]… we need much more.”

There has been no movement from the Syrian government on the United Nation’s appeal to allow the evacuation of some 700 critically injured and severely ill patients.

The UN – backed by the United States – has called for a cessation of hostilities after four days of heavy shelling this month killed more than 200 people in the Eastern Ghouta.

But Russia, the Syrian government’s main ally, has said the request was “not realistic”.

Now, Sweden and Kuwait have jointly prepared a draft resolution for the Security Council, to force a ceasefire and guarantee continued humanitarian access and medical evacuations.

“The humanitarian situation remains one of the worst the world has seen,” the Swedish government said in a statement. “When international law, including humanitarian law, is violated on a daily basis, it is our duty to act.”

Russia, as one of the council’s five permanent members, holds the power of veto on such resolutions.

“Gaining support for the resolution will not be easy – but we must try,” Sweden said.

The Eastern Ghouta has been under siege since 2013. It is a strategically important area, lying on the outskirts of Syria’s capital, Damascus – which can be hit by rockets fired by rebels in the nearby enclave.

It is completely surrounded by areas of Syrian government control – with the result that any aid delivery requires the approval of government forces.

But inside the Eastern Ghouta, the humanitarian situation is rapidly worsening.

In December, the International Committee of the Red Cross warned that the crisis had hit a “critical point”.

Then, in January, reports emerged of an alleged chlorine gas attack on the area, alongside claims that hospitals had been deliberately targeted.

The Syrian government and its allies deny such claims.

Captive in Syria: The Power of Perspective

Governance and Territorial Fragmentation in Syria: Assessing the Humanitarian and Political Challenges